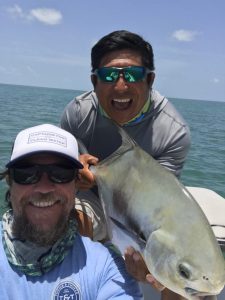 The second day of the Del Brown the weather was about the same as Day 1. There were 7 permit caught, 4 by one boat and three on 3 individual boats. The team that released 4 permit was Jose Ucan and Capt. Justin Rea. Mike Dawes and Capt. Will Benson released one, Justin Sexton and Capt Bear Holeman released one permit and Connor Flanagan and Capt. Brandon Cyr released the largest for the day 26.25″.